My Summer of T-Shirts

Lessons from a summer on the road 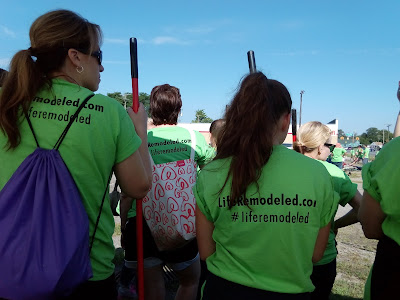 The summer of 2016 was a whirlwind for me. I traveled from Cincinnati to Denver to Washington to Detroit, attending conferences and summits and organizing an event. T shirts and slogans were everywhere. What surprised me was the evidence I saw of a process of recovery, a process more substantial than the slogans. I witnessed America healing.

In June, at Cincinnati’s Black Agenda summit, 1500 people met in large and small discussion  groups to address health, economics, neighborhoods, and schools. These working sessions will inform the development of a strategic plan to be released in 2017. Here’s how the organizers describe their work.

The Black Agenda is a movement of individuals and organizations working to improve the lives of Black Cincinnatians. The purpose is to bring the Black Community of Cincinnati together to prioritize our challenges as a race. We will develop a Strategic Plan to address those challenges to move our people forward in all aspects of our lives.

* * *
In early July, I attended the NAMI (National Alliance on Mental Illness) national convention in Denver.

NAMI is one of the largest and most effective advocacy organization on mental health issues in the United States. It was founded nearly 40 years ago as a social support group for parents of people with schizophrenia and other serious illness. Since then, NAMI’s national culture has become professionalized, infused with clinical, political, and institutional connections, not to mention the money it needs for staff, program development, and advocacy. Some of my friends in the mental health advocacy community see this as a bad thing, but I don’t. People with mental illness tend to be poor, sick, vulnerable, and marginalized; this makes more powerful allies useful and necessary.

There has always been some tension within NAMI related to managing the various cultures within the alliance. The group acknowledges this, and works to stay balanced. As long as I have known the group, NAMI has delivered forums for interaction, a mainstream policy platform, and a centrist approach towards mental health advocacy and education. It spends considerable time and resources developing its education programs. The issues it concerns itself with are complex, inherently difficult to wade through, and inherently difficult to reach consensus about.

The highlight of this year’s meeting was a presentation by researchers from the Aaron T. Beck Psychopathology Institute. Their work revealed the power of cognitive therapies to help people with schizophrenia. The most dramatic transformations occurred among people who were the most withdrawn. The researchers found that these patients still had the basic cognitive structures for recovery. Working intensively to address personal hopes and ambitions helped people come out of their shells and start making progress.

If extremely withdrawn institutionalized people dealing with schizophrenia can rebuild their lives, ordinary functional community people can make progress too.

My next major encounter with T-shirts was in Washington DC in mid-July. Dennis Banks, a co-founder of the American Indian Movement was concluding a 3600 mile walk across America focused on addiction and domestic violence. I helped the group put on a day-long event at the Lincoln Memorial.

July 15th, the day of our Washington event, was the culmination of more than a year of relationship building, program development, and culture bridging. I visited Dennis and his family at Leech Lake Indian Reservation in northern Minnesota, in January 2015. We corresponded for several months, and Dennis asked me to help him in July. Our original focus was drug abuse and addiction. Dennis visited Cincinnati and Northern Kentucky in September 2015. He met with local business and community leaders, did a radio appearance, and met with community members caught up in the heroin epidemic.

The Walk’s theme changed in January 2016, after Dennis’s granddaughter was murdered. She was a victim of domestic violence. Domestic violence became the second major theme of the cross country walk. The walk kicked off in February 2016 in La Jolla CA. Along the walk route, from California to Washington, a group of walk participants from Penn State University collected surveys about exposure to domestic violence. In the days before our event in Washington, we spent time with the staff of the National Museum of the American Indian and with American University’s Washington Internships for Native Students program. The day after our Lincoln Memorial event, these students made Dennis a guest of honor at their annual powwow. 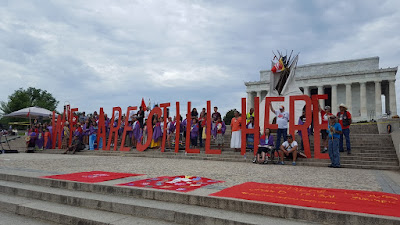 The process of walking across the United States was the most effective culturally appropriate way to engage Native American communities. The walkers spent time in 16 states and with over 100 tribal nations. Along the way, the participants attended many types of events and ceremonies: healing ceremonies, sweat lodges, prayer ceremonies, talking circles, Alcoholics Anonymous (AA) meetings, church services, fire circles, and water ceremonies. In addition to the participation in ceremonies, they met with drug and alcohol counselors, domestic violence advocates, community members, and tribal councils. They visited recovery centers, wellness clinics, community churches, native colleges, and residential programs for youth, domestic violence centers, drug and alcohol rehabilitation centers, and hospitals. They were hosted at community forums, benefit concerts, and conferences. This deep engagement process helped the team understand the issues impacting tribal communities.

At the end of all this research, the walkers learned something surprising. Here’s a quote from the research team’s final report:

The 2016 walk followed a southern route across the US. We are currently planning follow-up walks and DC events for 2017 and 2018.

My final event of the summer was flooded with T-shirts.

In Detroit, Life Remodeled puts 10,000 volunteers on the ground for one week every year. The volunteers clean up neighborhoods and remove blight. Guided by a process of extensive preparation and engagement with neighborhood residents and community stakeholders, the faith-based effort has rebuilt schools, repaired houses, cleared debris, and cut back weeds. This year’s project focused on redeveloping a park and cleaning up the surrounding neighborhood. Once the volunteer blitz is over, dozens of lawnmowers, string trimmers, shovels, and rakes are donated to community groups who pledge to continue the work for a year.

Next year, the organizers of Life Remodeled plan to team up with the region’s Native American communities to develop similar projects across the US.

So here’s my bottom line, the reasons I believe America is healing right now, today. The work to be done is not technical. People facing challenges are already developing strategies. There are kind, willing people everywhere, and thousands of people are already helping. Solid research tells us that even the most distressed people can make progress. The action steps involve helping people think through problems, and supporting families, and adding positive community supports. And love.

How hard is that?

We are moderating comments right now. Thank you for your message.